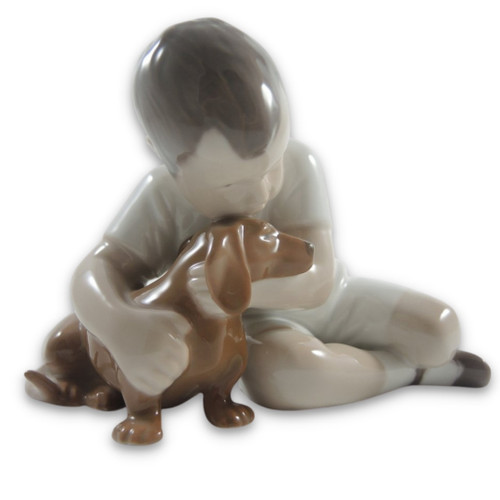 This figurine is in excellent condition with no damage.

The figure depicts a young boy sitting, bent over in embrace of his dog. The Dachshund is also sitting and appears perfectly at ease with the boys embrace, his head tucked under the boy's chin.  The name of the piece is based on this beautiful representation of a bond between child and pet and is "True Friendship". The figure is from a series by Ingeborg Plockross-Irminger and the production number of the figurine is 1951. The design is now owned and sold by Royal Copenhagen, and the boy is now produced with a blue shirt, not white.

The piece is a factory first.

It is marked with a blue B&G stamp and "Made in Denmark" which is in green. This indicates the piece was manufactured between 1970 and 1983.