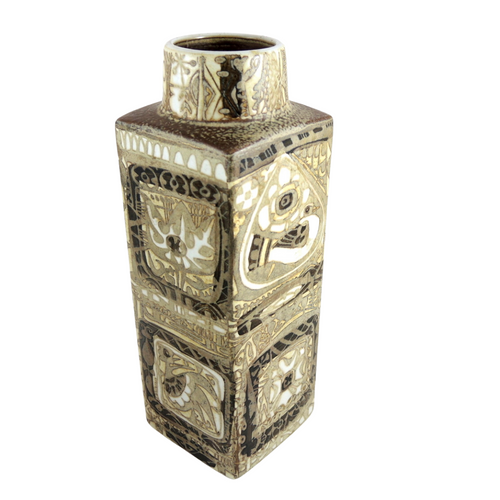 This is an elegant piece of Royal Copenhagen Faience or Art Pottery is in excellent condition.

The vase is from the Baca range decorated using a silk screening technique developed by Nils Thorssen and only used by a small number of artists at Royal Copenhagen. The technique allowed for a layering of patterns all merging in subtle colours.  Baca is latin for 'ring' and the name of the artist is shown within a ring to the underside of each piece. It is marked 719 for the pattern and 3259 for the shape.

As mentioned the piece is marked to the underside with the Baca circle inside of which is the Nils Thorssen mark. The Royal Copenhagen backstamp is marked for the period 1975-1979.

This piece is a factory first and has no faults.

The vase stands 220mm tall and measures 55mm across the rim. It is shown along side the smaller BACA vase.