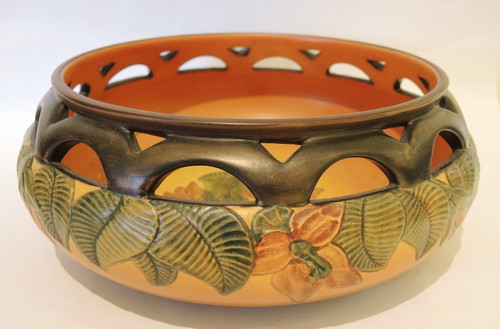 This lovely bowl was produced by Ipsens Enke Pottery, Bornholm, Denmark. The colours of orange and dull green are typical of the glaze from this pottery from the period 1918-1930.

The Ipsens Enke backstamp used from 1918-1955 is clear to the underside of the base. The title Ipsens Enke translates to widow of Ipsens. The pottery was first begun by Peter Ispens in 1843 after Peter had trained at Royal Copenhagen. He died young at 45 years old and left his wife Lovise with the running of the pottery and its stamp became PJE, for Peter Ipsens Enke. The name remained even though a succession of family members subsequently ran the pottery. Many famous sculptors worked at the pottery including Georg Jensen and Christian Joachim.

The bowl features a cut away section below the rim which is quite decorative. Beneath this is a floral design which looks like Hibiscus blooms. To the inside of the bowl is another cluster of blooms.

There are no cracks or chips to this piece. There are two small grazes to the glaze: one to the bottom of a leaf and the other to the underside of the cut away section exposing the coarse ceramic beneath. Both are shown. We find this type of pottery often has areas like this.

The bowl is quite lovely in its design and makes a beautiful display piece that can be put to good use.

The bowl is 250mm across and stands just under 100mm tall.